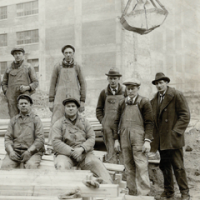 What Does the Future Hold?

What Does The Future Hold?
Let's look at our Past!

In 1921 the Toronto Home Builder's Association was created and 100 years later the successor of this industry association, the Building Industry and Land Development Association (BILD) celebrated their centenary.

BILD and the Toronto Star are presenting the history, growth and development of the GTA and surrounding regions and evolution of the Association. Each week a new decade is presented on how the Toronto/GTA grew and what prompted the development.
Once I started to read these articles, I couldn't put the newspaper down. Over the next few weeks, by decade, this region's history has been presented in the most meaningful way that has affected us all, even to today.

Starting from the days the First Nation traded furs from Port Sydenham, now known as Oshawa; immigration (my grandparents were immigrants); and the McLaughlin Carriage Company of Oshawa, later to become the Mclaughlin Motor Car Company. The automobile paved the way of the future and McLaughlin merging with General Motors made Oshawa Canada's car capital. The Auto Industry changed our world forever and brought on the roaring 20's.

Finally, the New York Stock Market crash in 1929 led to the Depression of the 30's.

After the war, there was a need for affordable homes. First on the list was to house the War Veterans that returned home from fighting. The Government passed Bills to help develop new programs for housing. Wow, more decades to go!

As I kept reading these articles of how, where and why we came about, I realized Durham has so much history and played a key role in the development of the GTA.

I was hooked, and so looking forward to the following week's issue; reading about our past and proud to be a part of its growth. Once you start reading you will know what part you and your family played in this development.

Herein may lie some answers to our future!
So please join me here on this journey into the past.