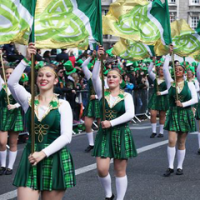 One of my sisters reminded me that this will be the second year in a row there will be no St. Patrick's Day parades...anywhere!

Her birthday is March 17th and she honestly believes she is of Irish heritage. I know I'm not, but Anna, a treasured member of our team, is as Irish as they come. She has a delightful accent, makes Irish soda bread for us all, and on St. Patrick's Day, dances a little Jig that she brought over from the Emerald Isle.

This year, to fill in for the lack of a parade, I purchased a wee bottle of Irish whiskey. After a sip or two of the grand elixir I became curious. Who invented whiskey?
Well, since McGoogle knows everything, I reached out for information. As I scoured the history, all the while sampling a dram here and a dram there, two countries stood out, each competing to earn the title. I did learn who, how, why and where the drink came about. But I'll leave that for you to discover. Have fun!

The interest rate dropped three times in March, 2020. This was one of the things that contributed to the surge in house prices during the pandemic.
In normal times, it was not uncommon to see a rate increase in the spring, and on Friday, March 12th of this year, the 5-year rate increased. Are things beginning to change? We also have a new CEO at CMHC starting in April. A sign of things to come?

Well, that's it. With no St. Paddy's Day parade, I'm going to have a wee taste of my Irish Whiskey on March 17th, and/or have a Baileys dessert, enjoy Anna's homemade soda bread and wait to see if more rate increases and corporate shuffles are looming on the horizon.
Stay tuned.