Incredibly, only a few blocks from Canada’s busiest highway and the first Go Train stop in the Durham Region there is a place that can make all that disappear. The only traffic you will find is people out for a run, walk, bike ride, sail or a swim. Frenchman’s Bay offers a peaceful retreat from the every day business of working for a living. Naturally divided into a west side and east side, you will find Frenchman’s Bay Marina, Frenchman’s Bay Yacht club and Pickering Rouge Canoe Club on the shoreline.

“The area around Frenchman’s Bay was originally inhabited by the Senecas, part of the five nations of the Iroquois.  Their village – known as Gandatsetiagon or Ganatsekwyagon, meaning “break in the cliffs” or “opening in the sand hills” – was one of the major villages of the Seneca tribe.  It was located just east of the mouth of the Rouge River.

In 1667, a French missionary, Francois de Salignac de Fenelon, arrived in Montreal, and in 1669 he travelled to Gandatsetiagon to work with the native people.  It is thought Frenchman’s Bay was named for Francois.”

In more recent years, a revitalization of the area has brought us Nautical Village, Millennium Square,  a splash pad, a boardwalk, “Home Place”, free concerts, top notch restaurants and some lovely shops.

Frenchman’s Bay is one of a series of large coastal wetlands along the north shore of Lake Ontario, home to a diversity of vegetation communities and labelled an Environmentally Significant Area by the Toronto and Region Conservation Authority. The spectacular scenery includes sandy beaches, colourful trails and plenty of wildlife creating a perfect spot to relax or take a stroll.

We could go on and on about the beauty of Frenchman’s Bay, but we think it would be best to show you... 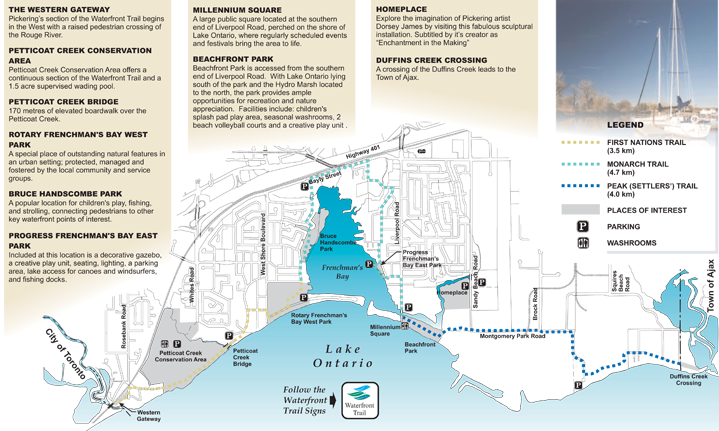 There are lots of places to stop and rest, have a picnic or just enjoy the view. There are all kinds of activities available both on land and in the water. Sailing, Paddle Boarding, Kite Boarding, Rowing, Fishing and even Yoga on the Beach.

Whatever you are looking for at Frenchman’s Bay the one thing we all agree is that the view is breathtaking!